Back from Estonia. Took a whole day for my ears to un-pop after the return flight. Lovely.

Tanya(rse) drinks haterade by the litre when it comes to mirror shots, so here you go dear. Have some scanner dust too. 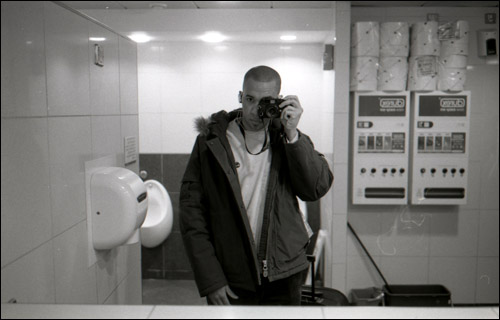 On the left of the pic you will see a hand dryer – that’s the XLERATOR. They are seriously pimping hand dryers; it’s like putting your hand in front of a mini jet engine (without the intense heat and melting flesh). Stansted airport is kitted out with these. If you’ve never experienced these hand dryers you have not lived! I want one for my house.

These things are like a revolution in hand dryers! The XLERATOR is sure to be the next thing in hand dryer technology! You don’t understand how good they are until you have tried them for yourself.

I may have seen some amazing things on my travels, but these little machines are still worth a mention! And a picture too. I’m sure you’ll notice them around – they’re bound to be everywhere soon! 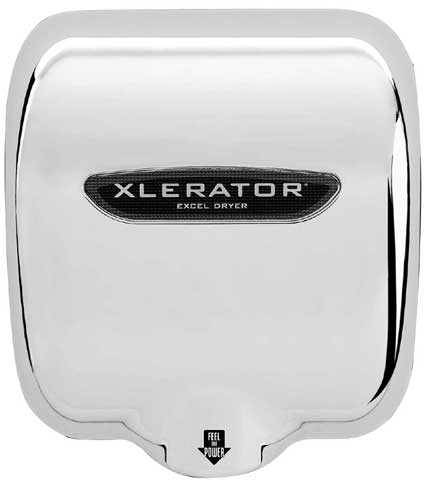 Tallinn is one of the richer cities in Eastern Europe; I was quite surprised when I got there. Maybe that view is influenced by the fact we were in an incredible four-star hotel (Â£65 for three nights!!). Parliamentary buildings are painted pink, I loved that. it was also interesting to see some Russian architecture.

25% of the people in Tallinn are Russian (wikipedia says 36.5% but I don’t see a source). Most Russians who live there and have lived there for many years don’t yet have citizenship; the Government won’t give it to them unless they learn Estonian and pass a test on the language. Sounds fair for the most part, but the elderly will probably never achieve this.

We went to an army shop in Tallinn which was VERY freaky. Lost of war relics in there; nazi armbands for sale, matchboxes with Hitler’s face on, communist alarm clocks etc. Then I noticed an MG-34, tommy gun, 30. Cal (I think) and a bunch of other guns on the floor, not to mention a crossbow on the window. Three other men were in the shop browsing; I was standing there wondering if they were nazis, communists or something else.

Estonians are quite fond of big berets when it is cold. I’m fond of focusing correctly, despite what this photo might suggest. 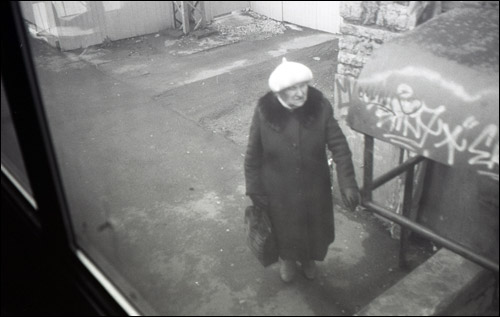 First day we were there we went to the zoo. Yes, the zoo in winter. We were the only people there (seriously). The zoo in Tallinn features many species of goat. I was sceptical about going until I got there and saw a… 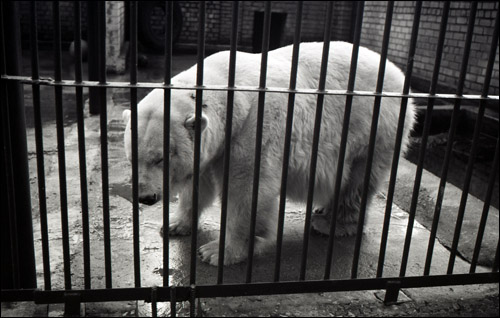 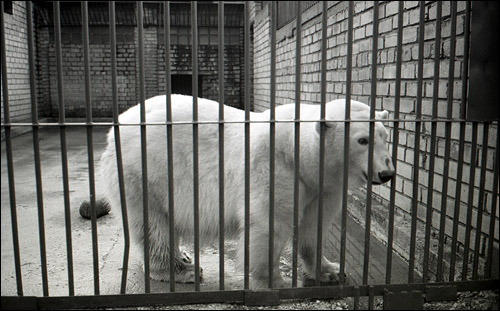 You’ve got to understand how ridiculous I find this. Polar bears in Estonia? POLAR BEARS? We don’t even have polar bears in London Zoo. I’m a wildlife freak, I watch all the David Attenborough shows and have a lot of the DVDs. Standing in front of this polar bear was freaking amazing. I mean I could have stepped over the knee-high barrier and patted it on the head! It probably would have eaten my fingers but still. It’s a shame I couldn’t get a shot of a paw. They are huge, their claws massive and they look VERY painful. This particular polar bear spent most of its time fiddling with padlock at the back of the cage.

Come to think of it, most of the animals at the Zoo were trying to escape. One of the chimps in the indoor rainforest section was trying to break the window facing us. I put my hand on the glass and he put his hand on the other side. Ahhh.

Entrance to the tropical section. Don’t feed girls to the crocodile. Lucky I saw that sign. 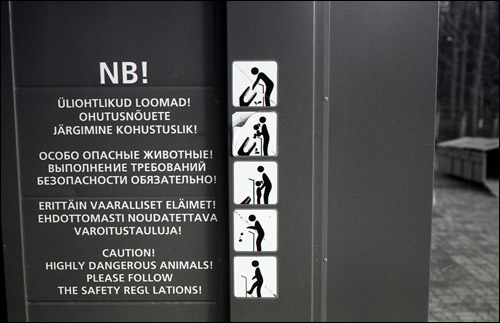 No shots from the inside because the condensation covered my camera in droplets and steam.

Elephants hanging out in a boxing ring. 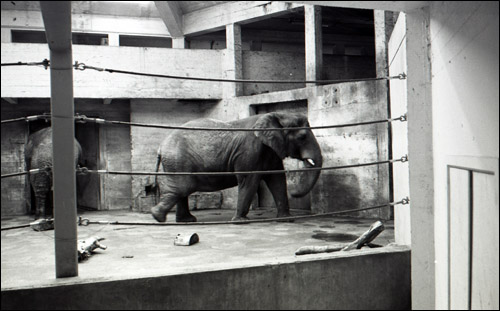 These goats were having their little hut cleaned. For some reason they like to jump all over it when the door is closed. They catch some serious air. Tony Hawk would be proud. 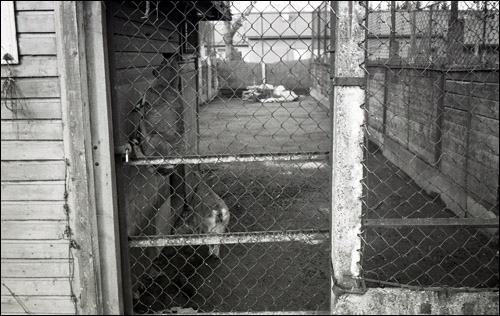 There’s also a seal pool in the zoo. When we got there this seal was lying on a grate at the bottom of the pool. The seal didn’t move for 3-4 minutes. We thought it was dead. Then suddenly it gets up and looks around at us like ‘what?’ – very bizarre, ultra ridiculous experience. 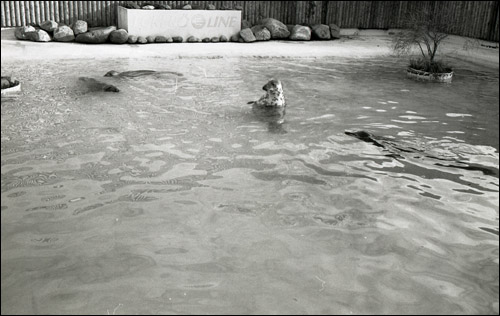 After the zoo we went to a traditional Estonian restaurant. I had Pike for the main course, which was great. Tallinn has a flagship drink called Vana Tallinn. Had to try a glass of that. 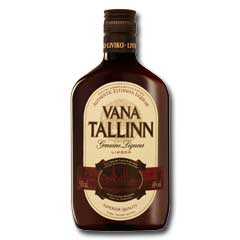 Another bird mystery. Where is the rest of the bird? Did something swoop by and eat it? 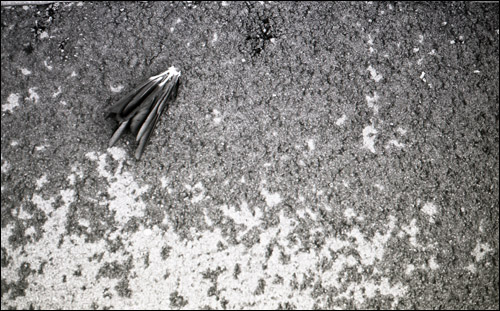 On Monday we went with Kristi to Tartu, South Estonia, where she lives.

No shitting or pissing on the train station. You’ll be fined 10,000 Kroon. 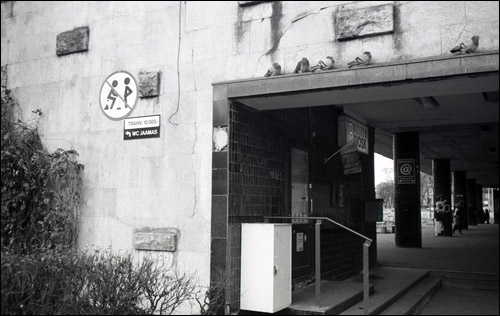 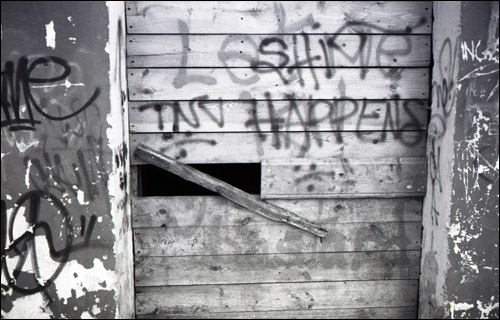 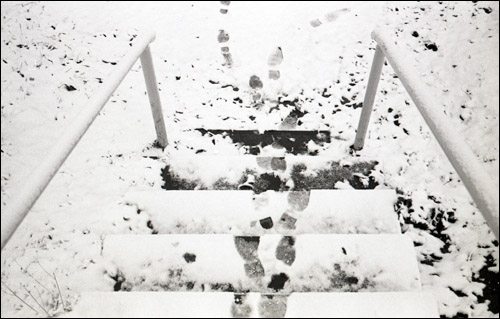 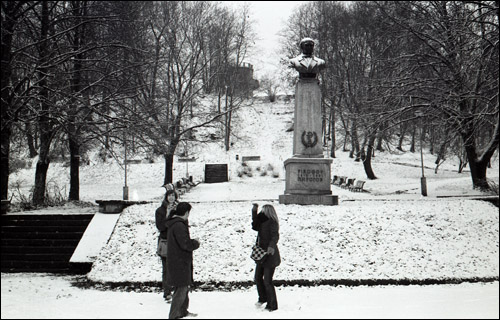 This bridge leads to Town Square (Raekoja Plats in Estonian I think), and beyond that the University. All the University students walk over the top of the arch at least once; an initiation of sorts. Three weeks ago a couple had sex on the top of the arch – someone made a photo and sent it to a newspaper. There newspaper tried to find the identities of the kinky culprits but no one told them. All the students know who it was. I’m showing you the bridge from the wrong side, by the way. :) 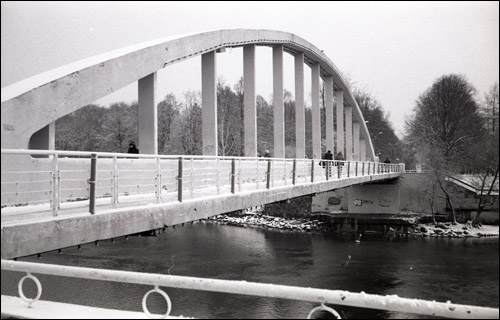 Town square. That building at the end is pink. 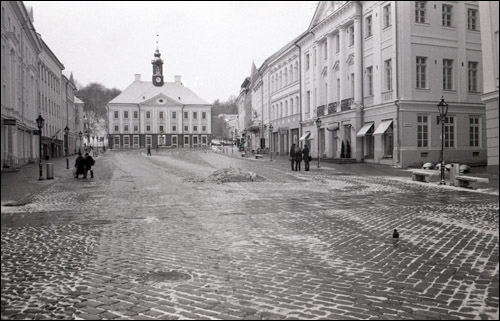 Brandy suggested I buy this hat. I suggested otherwise. 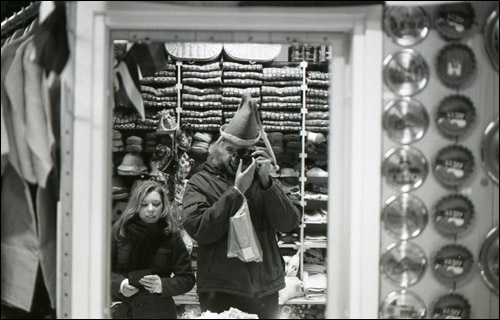 Estonia was fun. They’re very fond of gambling over there; lots of ‘casinos’ there. They are not really casinos though; they’re small seedy gambling rooms. 90% video slots and occasionally a roulette machine. The people of Tallinn working in shops and restaurants seem to generally be mildly unhappy and uninterested in conversation, the exception being the waitress who served Sean and I when we had (a seriously pimping) dinner in our hotel.

We didn’t get to check out as much old KGB stuff as I would have liked; we went to an address in old town cited in our Lonely Planet guide – the building was there however we couldn’t find anything that looked remotely like an entrance for visitors.

I’d recommend Estonia. If you’re going to go in winter bring warm clothes and a pair of Timberland boots.

Best phrase I learned = Palun Ã¼ks Ploomimah? Can I have some plum juice?