by James
with 13 comments
EuropeTravel

Geeky stuff: All images and video taken with a Samsung i85 compact digital camera.

Highlights from the first day of the San Fermin Festival 2008, Pamplona.

All the hotels in Pamplona were fully booked months in advance so Yassin and I booked a hotel in Vitoria, an hour’s train ride away. Vitoria is a 7-hour bus ride from Barcelona, where our journey started. 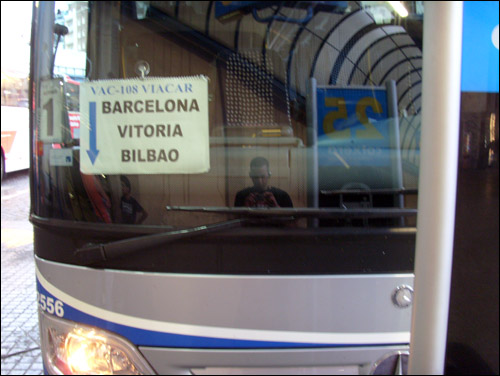 We dropped our bags, got changed and went straight to the train station. Yassin cut himself shaving and sported tissue on his face for the duration of the train ride to Pamplona. 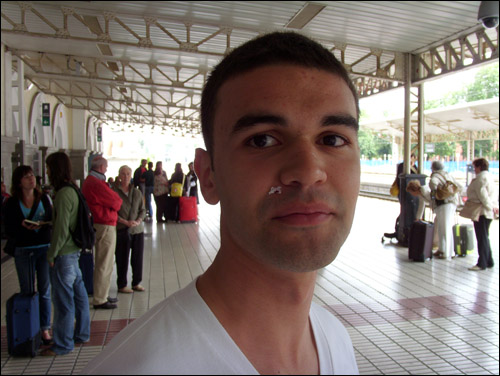 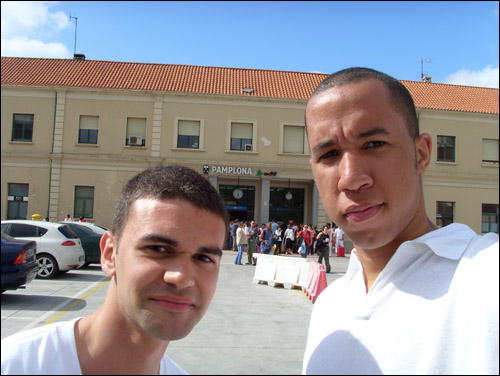 We arrived at around 3pm on Sunday, the first day of the festival. The festival began at noon but unfortunately train and coach times would not allow us to get there in time for the start. Thousands of people were already there when we arrived and the entire place was rocking. 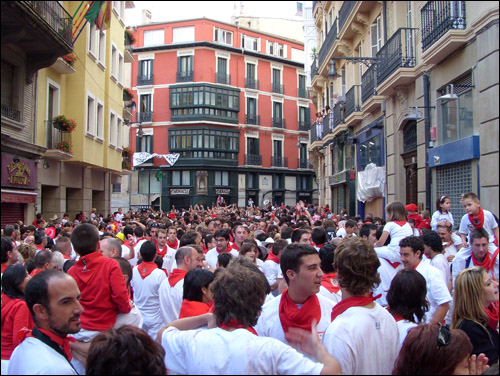 People were already quite hammered. 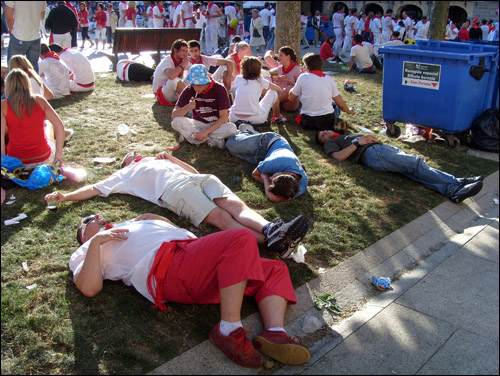 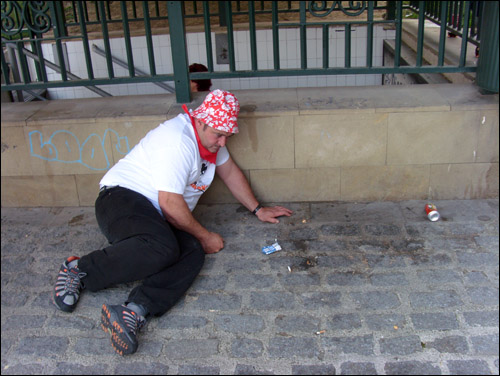 The toilets were 25 metres behind this chap. 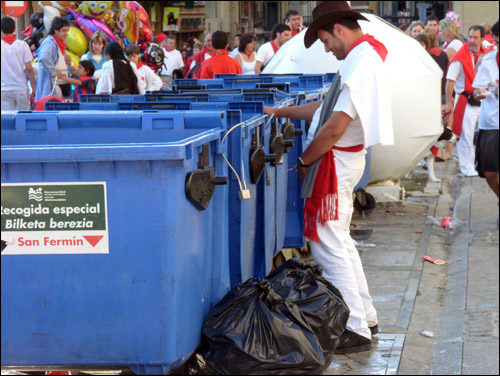 We went exploring and ended up at a funfair, where I played a darts game and won a bottle of Negrita Rum. Here I am with said rum. On another note, I seem to look very camp in all the photos Yassin took of me in Pamplona. 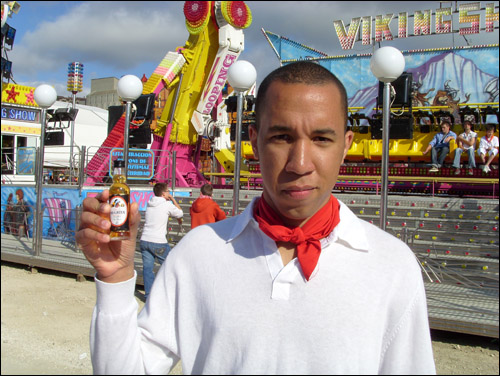 The night before the first run

Because our hotel was in another town, we had to stay in Pamplona all night in order to make the 8am bull run. This gave us a lot of free time with nothing but alcohol and thousands of Spanish party animals. 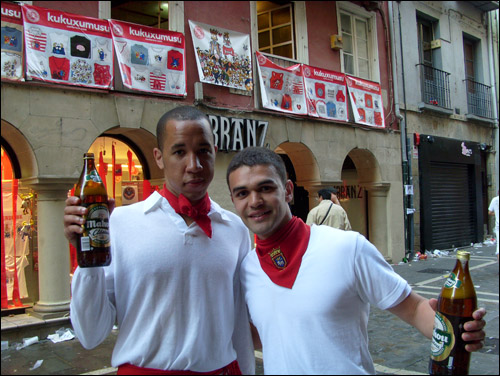 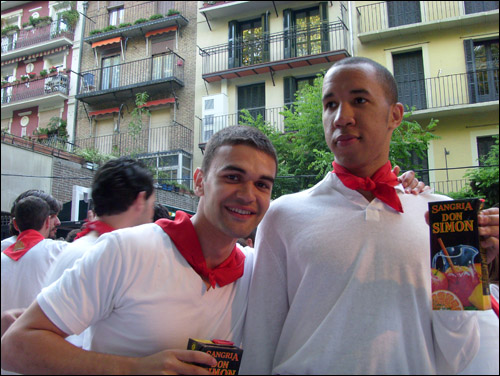 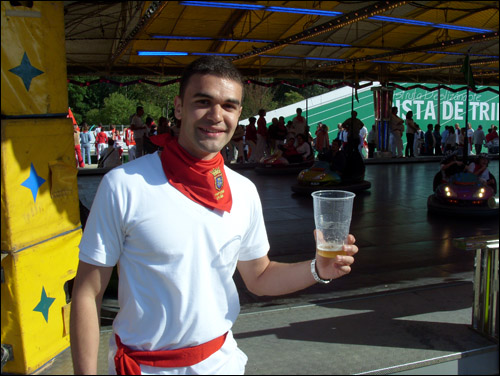 …dancing on tables with strangers… 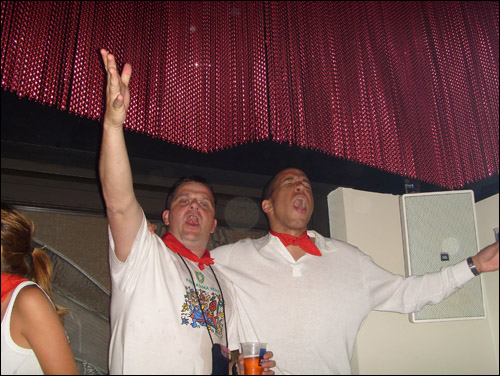 …and pictures of me throwing up outside. But we don’t want to see those now, do we?

This is part of the route, a few corners away from the beginning of the run where the bulls’ pens are. The barriers are designed to allow runners to climb, dive under, through or over them to escape a clash with the bulls. There are also narrow vertical gaps in the barriers – big enough for humans to get through but not bulls. The barriers are placed into the ground on race days; there are special cavities in the floor they slot in to. This shows how seriously they take their tradition and the safety of the runners. Also, police and medics are stationed at every exit point to help where necessary. This picture was taken on Sunday so don’t worry, no kids took part in the run. 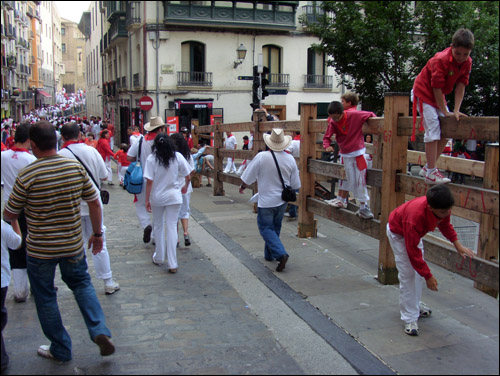 This barrier is on the first part of the run, about 40 metres from where the bulls are released. 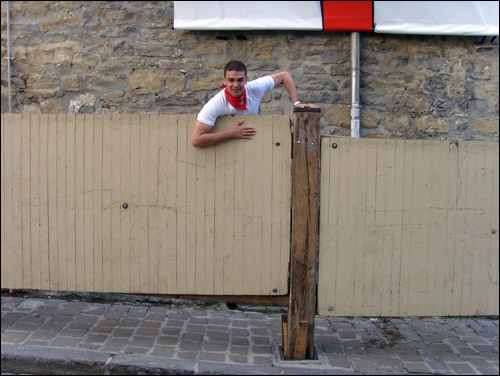 After shivering our way through Sunday night/Saturday morning, it was almost time. As runners were waiting for the firework marking the beginning of the run, people took up their viewing spots on balconies. 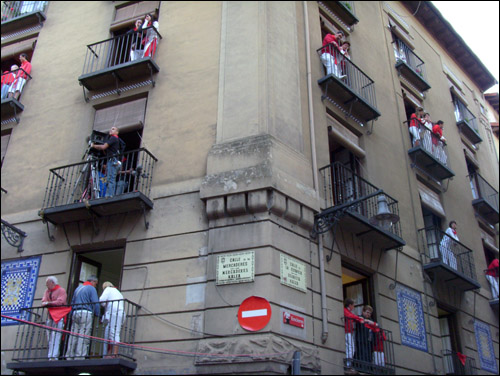 There were a lot of runners. Most of the people pictured here (us included) were kicked off the course so the authorities could dry the road to help everyone’s grip (including the bulls).

A bunch of us ran back to the start and climbed onto the course again. 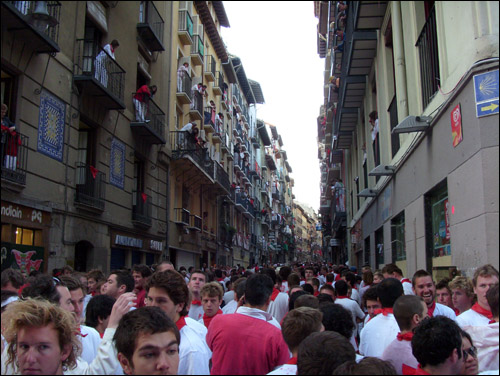 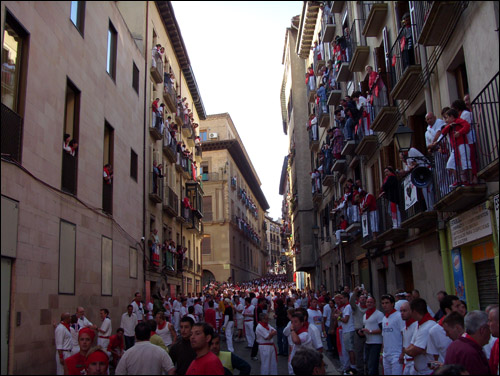 Shortly before the start of the run and we were ready to roll. After this shot we split up; I went to the front to sing with the guys who start the run, then realised I didn’t know the words. The newspapers are used to distract the bulls from you if necessary, though some try to tap the bulls on the nose with their newspapers. 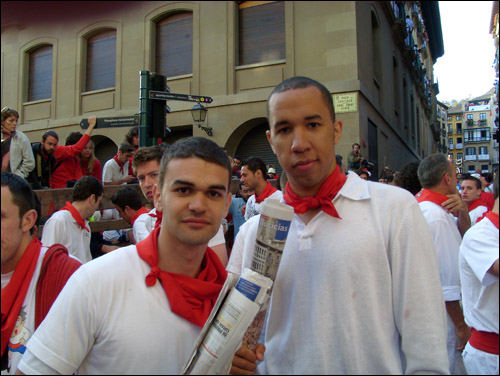 Yassin made a short video of the mayhem while running. 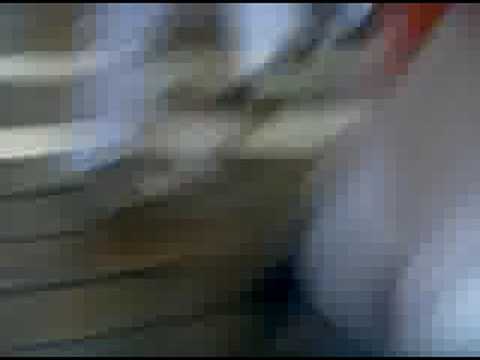 I didn’t take any shots or movies during the race but here is a shot of Yassin taken by Maite Hernández from sanfermin.com. As you can see, he is pushing some poor bastard in the way to save his own skin. It’s every man for himself out there. 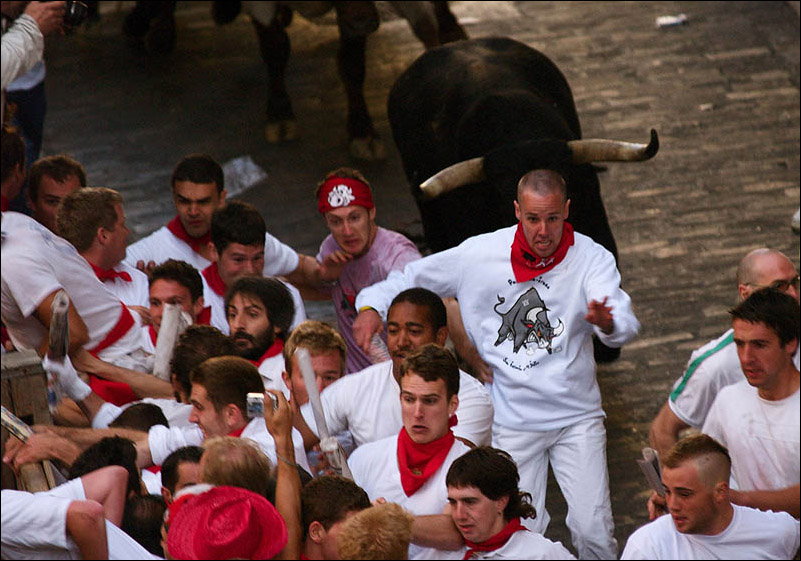 The below image from sanfermin.com shows the route and the injuries from today’s run. The run starts on the left of the map and goes uphill. The fourth injury logo on the map is where the bulls passed me. Between the two buildings on the map where you can see a number of injuries is a hotspot where you can be very exposed to the bulls because of the corners. When I ran past that point a guy was face down on the floor unconscious, rescued a few seconds later by medics and taken to hospital.

Because we positioned ourselves early in the race we didn’t make it to the Stadium before they closed the doors. Next year we’ll be sure to make it inside.

The bull run was the most exhilarating experience of my life, something I’ll never forget and something will definitely aim to do again next year. If you plan on going, make sure you get a hotel in Pamplona and make sure you book 6-9 months in advance. If I had to sum up the San Fermin festival in one word it would be:

Here is a video of the bull run itself.